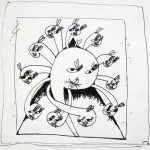 Robyn Hitchcock invented the internet in September, 1994. That’s when I joined the fegmaniax mailing list, a group where people who are interested in Robyn’s music can discuss other people who are interested in Robyn’s music (and sometimes even the music itself). It’s a cliche to say that “fegs are the nicest people”, and I consider many of them to be friends in every sense of the word, if you leave aside the fact that we’ve never actually met. “Touch You Natalie Jane” was written for a project showcasing original music by fegs, and the lyrics concern the sometimes uneasy boundaries between online and real-world relationships. Those boundaries became blurred beyond all meaning, five years later, when the song’s namesake died in the real world. Click here for song origins, downloads, and lyrics.

Click the image above for a 3-track playlist that includes “FYNJ” (a remix) and “Fuck You Natalie Jane”, a rough mix of the abandoned original NSFW version of the song, available here for the first time.

Chainsaw Sally sends a guy to the Afterlife® and guess what? He finds it preferable to the during-life. I don’t know anything about horror movies but former Next Window drummer JimmyO does: he makes them. Chainsaw Sally is a character created by April Monique Burril and JimmyO. Shattered and Blue is a song by The Misbelieves.
Download MP3 (6.5 MB) FLAC (23 MB) (try right-click “save as” if left-click doesn’t work for you)
Recorded on Music Street and © 2009 Music Street Music

I saw the brilliant green flash In the depths of the ‘80s When things could have gone either way The world crackled with energy While I tried to appear to be Brooding and restless and cunning First I buried a man it was not time to bury Then carried a weight I was not fit to carry I fought with him more than I’d fought him alive Now all of a sudden I’m sunning It’s a clear blue sky I’m such a lucky guy Could you stand any more sun? It shines a perfect beam Down on my routine I think I found the perfect sun It reflects off a boy on the verge of forgetting He has the whole world by the tail He can still name his monsters in roughly the order That they were first met and defeated. When a man selling Jesus spits hate at his brother He knows one of these things is not like the other He’s cracked the strong magic that got him this far He knows love was all that he needed

As anybody within spitting distance of a telegraph or carrier pigeon knows, Bonnington Truce is on the move after decades dormant. The Misbelieves have honored the occasion by recording a loving recreation of the theme song to Bonnington Truce’s long-lost and lamented Saturday morning TV show, “Come On Now Kids Yeah It’s Bonnington Truce!”
Download: MP3 (6.5 MB) FLAC (24 MB) (try right-click “save as” if left-click doesn’t work for you)
Archeology: The first voice in the song is Earl Lundy’s, wondering why nobody was dancing during Next Window’s set at the Avanti Theatre in Hattiesburg, March 5th, 1982. The sampled “Yeah”s throughout the song are Earl, Patrick Wallace, and Ben Young during Chariot Choogle later the same night.
Accuracy: Jeff is, in fact, the leader of the band.

This is for Adam Ford and all of our kids.

This is the official site for one of the Upper 8th Ward’s most misunderstood rock bands, The Misbelieves. Here you will find news and downloads for future Misbelieves releases, as well as a selection of recordings from earlier Misbelieves-related bands, including Next Window, Bicycle Thieves, Popsicle Thieves, Icicle Thieves, Tricycle Thieves, Pineapple Thieves, and David Bowie®.
If you’re looking for a particular song or band you can use the search box at the upper right, or select the band name under ‘Lieves Roots in the Categories box to the right. Or, if you want to skip the verbiage altogether and just download songs, you can click Just The MP3s, Please.