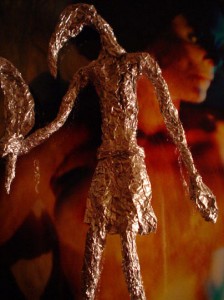 The fegmaniax list has witnessed plenty of heated arguments, but the phrase “FUCK YOU NATALIE JANE” was only ever used as an expression of love (or something). It’s the kind of thing that loses any shred of memetic charm if you look at it too closely, so I won’t, except to say that the phrase became an affectionate in-joke on the list, along with its counterpart, “FUCK YOU TOM CLARK”. When Rex Broome announced in 2003 that he was putting together a compilation of original songs by fegs, I decided to write one called “Fuck You Natalie Jane”.

The comp was called Tinfoil Thoths, a title that brings us straight back to Natalie Jane Jacobs. I didn’t know Natalie (aka “Gnat”, aka “Natalie Jane”) personally, but several members of the list were her friends in the real world. She was well known on the list for, among other things, her detailed, idiosyncratic gig reviews, and for her tinfoil sculptures. More than one gig review climaxed with Natalie presenting a tinfoil sculpture to the (often perplexed) artist. One of her preferred subjects was the Egyptian god, Thoth (the tinfoil Thoth on this page was snatched from Natalie’s MySpace page). Thus, “Tinfoil Thoths: Songs from the Globe of Fegs”. 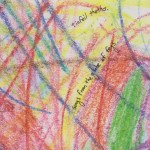 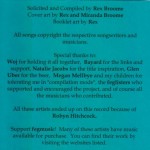 I wrote “Fuck You Natalie Jane” pretty quickly and recorded a demo that I expected to develop into a finished song. I abandoned that first effort almost immediately, for a couple of reasons. I liked the melody well enough that I wasn’t really thrilled about saddling it with a title and hook that had to be whispered in mixed company. The first draft had also landed on a bit of a theme, one better served by “touch” than by “fuck”. The singer lists some possible advantages of an online friendship, a relationship uncomplicated by physicality. He doesn’t want to leave her, or miss her. Her face is “never the same” but it “won’t ever die”.

Rex’s compilation turned out great, and I was really happy to be included with so many talented people (I temporarily rechristened my imaginary band Popsicle Thieves, for no particular reason). I’m pretty sure Natalie listened to the CD because she mentioned it on the list, but I have no idea what she thought about my contribution. When she died, quite unexpectedly and much too young in 2008, one of Natalie’s real-world friends was kind enough to look me up and call me. As we spoke, I had to fight the feeling that I was some kind of imposter. He was heartbroken, while I wasn’t really sure what to do with the sadness I felt. It’s a subject I return to often, as we navigate love and grief in a world full of dear friends we’ve never met.

Download FYNJ 6MB mp3 “FYNJ” is a remix that grew out of a mistake. I had isolated 4 beats of the bass part, intending to punch in and correct an obvious missed note. As I looped the mistake I started playing around with mixing in other elements of the song. The result is “FYNJ”. The flubbed bass part is still there in the finished song.